The little auxiliary that could 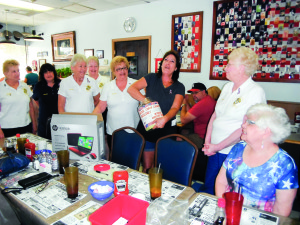 Memorial services. Patriotic celebrations. Contributing to helping an entire 8th-grade class get their own American flags. Donating to — and helping — Wreaths Across America honor fallen veterans at Christmastime. Giving final honors to veterans.
That’s just a fraction of what the Auxiliary Unit 496 of the Jack Ivy 666 Detachment of the Marine Corps League, Port St. Lucie, gets up to.
With only 17 women (thus far).
“We do an awful lot with only a few people,” said Georgia Leon, auxiliary president, in what can only be described as an understatement.
The men of the detachment get the lion’s share of attention for their many activities that directly affect the well-being of veterans and their families — mostly for fellow Marines, but also for other veterans in need.
Behind the scenes, though, the ladies of the auxiliary are not only supporting the men’s efforts, but doing a lot of things on their own.
“Within the auxiliary as a whole, there are five categories of service,” Leon explained. “And we do something in all five.”
Category one is “Americanism,” involving the activities described above.
“We’ve also donated to the POW/MIA monument at Veterans Memorial Park, and to the Cpl. Ian Zook Memorial, as part of that,” Leon said.
Category two is Child Welfare and Youth Activities.
“We collect school supplies for needy kids, and Christmas presents” — both for the auxiliary’s Christmas in July party as well as the traditional Marines’ Toys For Tots initiative, Leon said.
“Some things we do directly, and others we do through an organization, for example the Christmas presents.
“We also participate in the MISS program — Mothers and Infants Striving for Success — which gives transitional housing to homeless mothers with small children,” Leon said. “They are able to stay up to 18 months while they transition to a job and a home of their own.”
The third category is Civics. “We’re ‘serial volunteers,’” Leon said with a laugh. “Meals on Wheels, Dogs and Cats Forever, church activities, you name it.”
The MISS assistance is also included in Civics, as the auxiliary ladies create gift baskets of toiletries for the homeless mothers.

Staff photo by Mary Kemper
Georgia Leon, president of the Jack Ivy Detachment 666 Auxiliary of the Marine Corps League, displays the auxiliary’s charter on a wall at American Legion Post 318, Port St. Lucie, which shares premises with the detachment and auxiliary.

“We’ve also ‘adopted’ needy nursing home residents,” Leon said. “And we’re really looking forward to going in when the new state home opens (the Ardie R. Copas State Veterans Nursing Facility, slated to be opened in Tradition).”
Category four is Rehabilitation.
“We support veterans and their families who are not involved with the VA,” Leon said. “Through the United Veterans of St. Lucie County, we donate gift and gas cards to needy families.
“We also put together care packages in November for troops serving overseas in harm’s way. That way, we make sure they receive them by Christmas.”
And, finally, as if all of the above weren’t enough, there’s category five, Veterans Affairs Voluntary Service.
“Once a month, we work with two other auxiliary units in the West Palm Beach VA catchment area,” Leon said. She is a deputy on the VAVS board.
“We do bingo for the (Community Living Center) residents, and we donate coupons for the canteen,” she said. “They really enjoy it.”
Also, the auxiliary donates gift cards and baby products for the women’s health program, as well as lap robes for the CLC residents and patients in the chemotherapy unit.
“And we’re really excited, because this year, we’re going to have a ‘Birthday Ball’ in November at the nursing home,” Leon said. It’ll be in conjunction with the traditional Marine Corps Birthday Ball, but on a smaller scale.
“It’ll be an afternoon party, with refreshments, and we’re working on entertainment,” she said. “We’ll of course have ceremonies — presenting the Colors, and the cutting of the cake.”
The men of the detachment will perform the ceremonies, but the auxiliary will do practically everything else.
“And, well, that’s all we do,” Leon said, laughing.
Although the auxiliary is a young unit — it’s only been in existence for two years — it’s won two awards for national service as well as a unit Meritorious Service citation for supporting an injured Marine reservist and his family.
No team is successful without its members, and Leon is adamant about making sure hers get all the credit they deserve, especially when it comes to fundraising — vital to the auxiliary’s many, many activities.
“Bless their hearts, they work their fannies off,” Leon said.
There’s Ursula Carcel, chair of the Ways and Means Committee, who, last year, was named Department of Florida Marine Corps League Auxiliary Member of the Year. Carcel is also senior vice president of the auxiliary — “Most of us wear two hats,” Leon said.
There’s also Lorraine Sweeney, junior vice president; Maddy Lanigan, judge advocate; Mary Beth Maher, secretary/treasurer; and Colleen Eckert, chaplain, whose tasks involve following up with phone cards and visits to members in distress.
On the Fourth of July, when everyone else was picnicking or otherwise celebrating Independence Day, the auxiliary met at the Bayshore Diner, to raffle off a Hewlett-Packard laptop computer complete with mouse and carrying case. Owner Dallas Banschbach drew the winning ticket, which was bought by Lyle Hilton (hometown unknown; only phone numbers were written on the tickets).
More than $1,900 was earned from the raffle, which will go toward, among other things, scholarships for two deserving women veterans to go to college.
All of this little auxiliary’s efforts add up to nothing short of amazing, and these ladies have no intention of slowing down.
Those interested in joining this dynamic team can contact Leon at (772) 446-9998, or via email at georgiamcla@yahoo.com.