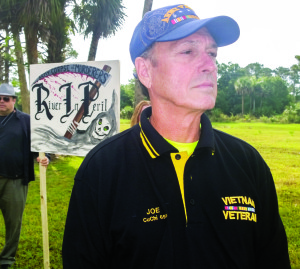 Photo by Patrick McCallister
Army veteran Joe Howard, Port St. Lucie, joined hundreds protesting slowed progress on the Central Everglades Planning Project by the Army Corps of Engineers at a mock funeral for the Indian River Lagoon on Saturday, May 3.

Hundreds showed up to fight for the Indian River Lagoon. Many sported caps and T-shirts that spoke about their experience serving others and fighting for things they believe in. They were veterans. Lots of veterans.
“Veterans care,” Rick DeTata, Port St. Lucie, said. The Air Force and Navy veteran added, “They care about the county and country.”
On Saturday, May 3, a loose coalition of advocates called the River Warriors held a mock funeral for the Indian River Lagoon at Phipps Park — 2175 S.W. Locks Road, Stuart — to protest, among other things, slowed progress on the Central Everglades Planning Project. CEPP is part of state and federal efforts to restore the natural flow of waters going into Lake Okeechobee southward.