Loss of a legend 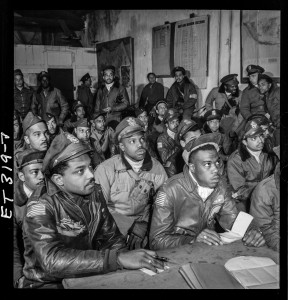 Source: Wikimedia Commons
Then-Flight Officer Hiram E. Mann, left, front, joins other members of the 332nd Fighting Group, U.S. Army Air Corps, at a briefing at their base in Ramitelli, Italy, before flying on a bomber escort mission to Germany in March 1945.

Editor’s note: It is with much sadness and respect that Veteran Voice marks the passing of a matchless pioneer and true gentleman. We have had the honor of covering Lt. Col. Mann on several occasions, most recently his appearance at the 2014 Tico Warbird Museum Airshow in Titusville. Please see Mary Kemper’s column at right.

Mann was one of the legendary Tuskegee Airmen, the first black pilots to serve in the U.S. armed forces in World War II. He continued on active duty until 1972, when he retired.

He had always wanted to fly since he was a young boy, but it took dogged persistence and three tries to enter the Army Air Corps, which he finally did in 1942.