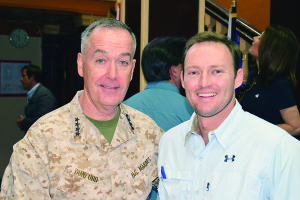 Photo courtesy of The Office of Congressman Patrick Murphy
Over Memorial Day weekend, U.S. Rep. Patrick Murphy, D-Jupiter, visited U.S. troops stationed in Afghanistan. Murphy was part of a bipartisan delegation, spending time with service members as well as meeting with military leaders to be updated on the current situation on the ground. Murphy is shown here with U.S. Marine Corps Gen. Joseph E. Dunford Jr., who was just last week named next commandant of the Marine Corps.

TREASURE COAST — Much like the rest of Congress, who was left in the dark about the swap of an American prisoner of war for five Guantanamo Bay Taliban detainees, U.S. Rep. Patrick Murphy, D-Jupiter, has a lot of questions for the Obama Administration.
“I do have some reservations about this deal and I have a lot of questions,” Murphy said.
Bowe Bergdahl, 28, was traded late last month by the Obama Administration for five Taliban members held in Guantanamo Bay, Cuba.
Bergdahl apparently left his platoon and was captured by the Taliban in Afghanistan in June 2009. The circumstances under which Bergdahl went missing remain murky. Former Army mates have spoken out publicly, saying Bergdahl had become disillusioned by the war and went AWOL.
The Obama Administration is also under fire for not briefing Congress before the exchange, a requirement of federal law if detainees are going to be released.