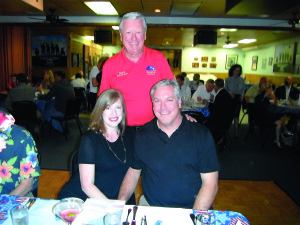 Staff photo by Mary Kemper
Martin Zickert, standing, attends a reception in honor of his service with the Indian River Veterans Council along with his son, Mike, seated, right, and daughter-in-law Renee July 16 at the Veterans Club of Vero Beach.

Mary Kemper
Staff Writer
It’s tough to put into words just how much Martin “Marty” Zickert has done for the veterans of Indian River County, but a large group of well-wishers gave it their best try at a reception for him July 16 at the Veterans Club of Vero Beach. The retired Air Force colonel is taking what associates call a “leave of absence” from the presidency of the council, due to his wife, Penny’s, health issues.