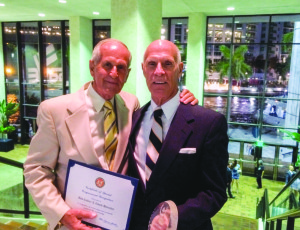 Patrick McCallister
For Veteran Voice
Chuck Hunziker and Bob Collier are called a legacy couple in some circles. The two military veterans have been a couple for more than a half century. Now the Fort Lauderdale pair wants the state to recognize their recent marriage. “It was a long engagement,” Hunziker said. “We wanted to make sure we were doing the right thing, so we waited 50 years.”