A front-row seat in history’s theater 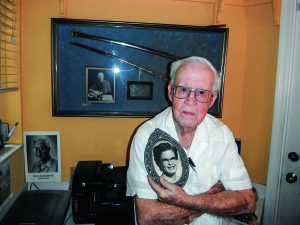 Staff photo by Mary Kemper
Joe Crankshaw, Stuart, is an Army veteran of the Korean War and a longtime newspaperman with Scripps publications. He is seen here in his home holding a portrait of his wife, Jean, of 35 years, in front of a display containing a portrait of his great-grandfather and a saber passed down through generations of his family.

Mary Kemper
Staff Writer
Editor’s note: This is Part 1 of a two-part story. Part 2 will be published in next week’s issue. Joe Crankshaw is one of a vanishing breed — a newspaperman who is also a combat-wounded Army veteran. The vast majority of today’s journalists have never served, much less experienced war firsthand. Not so for Joe.