A soldier’s tale of Katrina aftermath 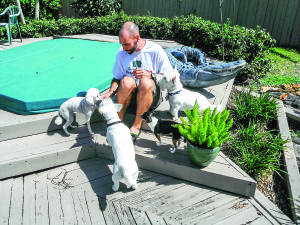 Mary Kemper
Staff Writer
“The smell … when we got off the C130, it hit me like a sledgehammer. It was like sticking your head in a toilet.”
Former Army National Guard Sgt. Jason “Jay” Harris, of Vero Beach, said the memories — both horrible and gratifying — of his one-month deployment to New Orleans in the immediate aftermath of Hurricane Katrina will last his lifetime.
On Aug. 29, 2005, Katrina slammed into the Gulf states, killing 1,833 and causing more than $100 billion in damages. One week later, Harris arrived in New Orleans to help the devastated residents.