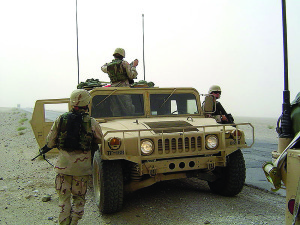 Source: Wikimedia Commons
Post-traumatic Stress Disorder (PTSD) is a mental health problem that can occur after a traumatic event like war, assault, or disaster. As troop strength continues to wind down in Afghanistan and Iraq, mental health professionals say they are treating more and more cases of PTSD, the symptoms of which may not become evident until months or years later.

Patrick McCallister
For Veteran Voice
Editor’s note: This is the second of a four-part series about the Department of Veterans Affairs St. Lucie County PTSD Clinical Team Outpatient Program. The program primarily uses three evidence-based treatments for PTSD. Veteran Voice will look at each. This week, we’ll look at Prolonged Exposure Therapy.

It’s hard to imagine easing the symptoms of post-traumatic stress disorder by repeatedly exposing yourself to the event or events that caused it in the first place. It sounds like homeopathy’s underlying premise: giving a sick person medicines that would usually cause the same symptoms he or she is experiencing in order to alleviate them. But Jack Gamble, clinical coordinator at the Department of Veterans Affairs St. Lucie County PTSD Clinical Team Outpatient Program, said unlike the controversial medical practice, there’s plenty of evidence that Prolonged Exposure Therapy works.
“The term is ‘flooding,’” Gamble said. “It means intensive exposure.”