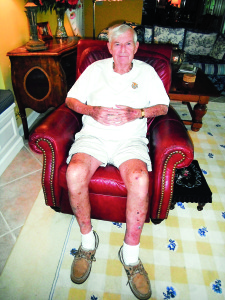 James Bradley
For Veteran Voice
Editor’s note: Originally from Port Huron, Mich., Marine Corps veteran James Bradley, Jensen Beach, wrote a memoir of his service in World War II. Here, he tells his own story, which Veteran Voice will publish in two parts. It has been edited only for length and grammar. Following is Part 1.

It was the summer of 1943.
I had joined the Marine Corps Reserves after talking to a few of my older high school fraternity brothers who were on leave from the Marines.
The Marines had been fighting on Guadalcanal just before this, and their fighting effort was in the papers daily. I was about to join the Army Air Corps, as it was known back then. But I found that the Air Corps was not front-line military enough for me, so shortly afterward, I was off to boot camp in San Diego, Calif. As of Aug. 10, I had turned 18.