Closing down the war 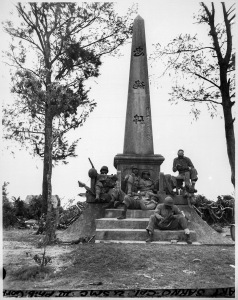 Source: Wikimedia Commons
A unit of Marines rests briefly at the base of a Japanese memorial on the island of Okinawa while in pursuit of Japanese troops in World War II.

James Bradley
For Veteran Voice
Editor’s note: This is the second of two parts of James Bradley’s self-written memoirs of his service in World War II. At the end of Part 1, Bradley’s unit, along with others, was assaulting the island of Okinawa, near Naha. Part 2 picks up the story.

The tank platoon I was with (on Okinawa) concentrated our fire on a big soap factory south of town that would make an excellent bunker. We emptied out every round of high explosive we had, including the “Willy Peter” (white phosphorous), which was a large shower of red-hot metal.
To Read More Subscribe Here