Who let the dogs out for ‘Howl-O-Ween’? 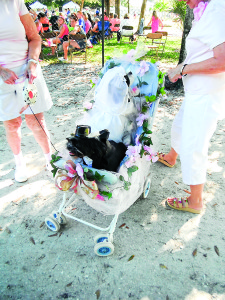 Staff photo by Mary Kemper
“Bride and groom” Oscar and Sophie arrive in wedding finery at the Dogs For Life “Howl-O-Ween” event held Oct. 18 at the Dog Park, Vero Beach. Their owners, who declined to be named, said the two pooches were “renewing their vows after two years of marriage.”

Mary Kemper
Staff Writer
It was a day for dog owners far and wide to dress up their pets to help benefit Dogs For Life, Vero Beach, Oct. 18.
The event, billed as “Howl-O-Ween,” had more than 60 dogs and their owners marching in the “pawrade,” in all their costumed finery. In all, more than 300 attended.
“Aww, look at that cute one!” was a phrase heard throughout the day. Costumes ranged from superheroes, ballerinas, butterflies and bumblebees, and there were even two dressed up as spiders, inspired by a video prank that recently went “viral” on the Internet (type “dog spider prank” in a search engine to view the hilarious stunt).
To Read More Subscribe Here