‘They flew with terror’ 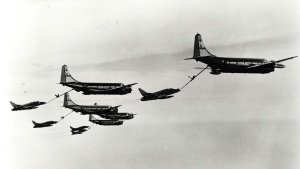 Mary Kemper
Staff Writer
Almost everyone from a certain generation remembers the Saturday Evening Post, a magazine that was a staple in millions of American homes during World War II and the Korean War.
Many people are surprised that the Post is still publishing — though only bimonthly, and circulation is only a fraction of its heyday, having begun to dwindle during the Vietnam War years and thereafter.
In 1957, the Post was still read by millions — and millions were chilled by a story in its July 13 edition titled “They Flew With Terror.”
The story, written by Paul N. Williams, centered on the crew of a KC-97G tanker aircraft, Flight Turmoil Five Four, whose job it was to refuel other planes, based in Thule, Greenland, and their fateful mission on the night of Nov. 28, 1956.
To Read More Subscribe Here