Story behind ‘to the shores of Tripoli’ 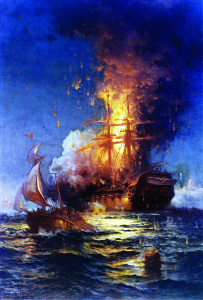 Source: Wikimedia Commons
This painting depicts the USS Philadelphia, previously captured by the Tripolitans, ablaze after she was boarded by Stephen Decatur and 60 men and set afire, making their escape in the ketch Intrepid, depicted in the foreground, in 1804.

Brevard Veterans Council Inc.
For Veteran Voice
Most Americans are unaware of the fact that more than 200 years ago, the United States declared war on Islamic terrorism, and Thomas Jefferson led the charge!
At the height of the 18th century, Muslim pirates were the terror of the Mediterranean and a large area of the North Atlantic seas.
They attacked every ship in sight, and held the crews for exorbitant ransoms. Those taken hostage were subjected to barbaric treatment and wrote heart-breaking letters back home, begging their government and family members to pay whatever their captors demanded.
These extortionists of the high seas represented the Islamic nations of Tripoli, Tunis, Morocco and Algiers — collectively referred to as the Barbary Coast — and presented a dangerous and unprovoked threat to the new American republic.
To Read More Subscribe Here