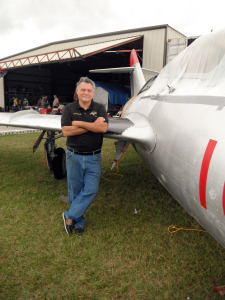 Staff photo by Mary Kemper
Dr. Luis Villar, who practices cosmetic and reconstructive surgery in Stuart, stands next to a Cold War-era Russian MIG trainer aircraft at Witham Field during a reception he held Nov. 22.

Mary Kemper
Staff Writer
On an overcast and windy Nov. 22, scores of people nevertheless enjoyed a reception held by Stuart plastic surgeon Dr. Luis Villar, who shared his private aviation museum and aircraft under reconstruction.
Located at Witham Field, Villar’s hangar is filled with aviation memorabilia from flight’s earliest days on up to Cold-War era planes.
By itself, the museum is a trove of artifacts from days gone by, as well as hundreds of models of aircraft and ships.
“This ‘gentleman’ is wearing the uniform of the 7th Cavalry just before World War I, during the hunt for Pancho Villa in Mexico,” Villar explained during a personally conducted tour of the museum. He referred to a mannequin on display, along with weapons and other artifacts.
“Next to him is a doctor from the very same mission. Note the Gillette razor, and the blades. They’re exactly the same as are used today,” he said.