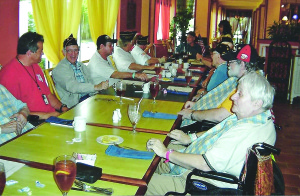 Photo courtesy of Jerry Shapiro
Members of the Jewish War Veterans of the United States of America Post 549 treat a group of hospital-bound veterans from West Palm Beach VA Medical Center to a lunch outing.

Mary Kemper
Staff Writer
They might be few in number, but the members of Post 549, Jewish War Veterans of the United States of America Inc., do great things for their fellow veterans and their community.
“We’re the only post on the Treasure Coast,” said member Jerry Shapiro, at a recent meeting in Stuart.
“We’re also the oldest veterans’ organization in the U.S.,” he said. “It started with an act of Congress in 1889.”
The post’s main focus is on getting wheelchair-using veterans from Stuart out for a day and treat them to a nice lunch.
On an alternating basis, the post members also bring catered lunches to blind veterans at the VA Medical Center in West Palm Beach.
To Read More Subscribe Here