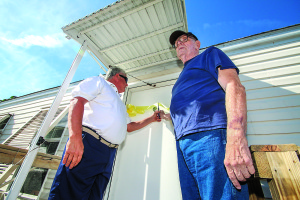 Mitch Kloorfain
chief photographer
Kevin Donhue, House-A-Vet director, and Bob Drexler cut the ribbon to celebrate the opening of a transitional home through House-A-Vet for veterans in need of housing. Drexler is the current resident and another family is scheduled to move there next week.

Patrick McCallister
For Veteran Voice
MARTIN COUNTY — Homeless vets in Martin County have a new help and hope: House-A-Vet’s Lundberg-McMahon Home in Stuart.
Palm City volunteer, Pete Ellis, said his housing is secure, so why’d he spend hours helping to prepare the home?
“Pay it forward,” Ellis said. Works every time.”
Ellis was in the Air Force from 1955 to 1962.
The house for temporarily helping homeless veterans was dedicated on Wednesday, Jan. 7. The first resident, who was living there as work was still under way, was Bob Drexler.
Drexler was doing well when he moved to Florida’s Treasure Coast about 15 years ago.
“I had money in the bank, sold a building, and came here,” he said.
Shortly after getting to the Sunshine State, the now 80-year-old Army veteran, who’d served in the Korean War, found out about a hot investment opportunity — Enron.
To Read More Subscribe Here