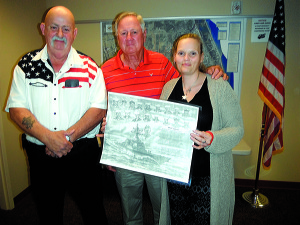 Staff photo by Mary Kemper
At the Indian River Veterans Council meeting Jan. 6, Jamie Scott Owens, widow of Ronald Scott Owens, was presented with a special sketch of the USS Cole that included an image of her late husband, who was killed on the ship, along with 16 others, in a terrorist attack on Oct. 12, 2000. To Owens Scott’s left is Edward ‘Lewie’ Lewis, a retired Navy veteran who crafted the sketch, along with Al Scott, her father.

Mary Kemper
Staff Writer
The presentation of a special sketch to Jamie Scott Owens, widow of USS Cole sailor Ronald Scott Owens, was the highlight of the monthly meeting of the Indian River Veterans Council Jan. 5.
Scott Owens was accompanied by her father, Al Scott, when she was given a sketch made by Edward ‘Lewie’ Lewis, a retired Navy veteran.
“It was one of the worst nights of our life,” said Al Scott, referring to Oct. 12, 2000, when the USS Cole was struck by a terrorist bomb, killing 17, including Scott Owens.
To Read More Subscribe Here