Governor’s Medal awarded to more than 200 in Melbourne 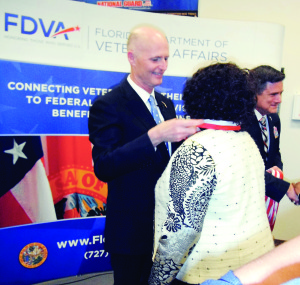 Staff photo by Mary Kemper
Florida Gov. Rick Scott places a medal around the neck of a veteran at the Governor’s Service Medal presentation Jan. 16 at the Army National Guard Armory in Melbourne.

Mary Kemper
Staff Writer
More than 200 veterans received the Florida Governor’s Service Medal from Gov. Rick Scott at a ceremony Jan. 16 at the Army National Guard Armory in Melbourne, where the honored guest was former Army Sgt. 1st Class Melvin Morris, Cocoa, who recently received the Congressional Medal of Honor.
(Editor’s note: Please see past Veteran Voice coverage of Morris’ achievements, as well as his appearance Jan. 17 in Fort Pierce, Page 1)
“I’m here to honor the freedoms paid for by everyone who served our country,” Morris said to the assembled veterans, “and for all their families’ sacrifices.”
Opening remarks were given by Steve Murray, communications director of the Florida Department of Veterans Affairs, who acted as master of ceremonies.
He asked for a moment of silence “for those who died for the liberties we so deeply cherish.”
To Read More Subscribe Here