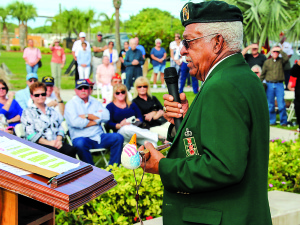 Mitch Kloorfain/chief photographer
Former Army Sgt. 1st Class Melvin Morris, Cocoa, a recent recipient of the Medal of Honor, center, spoke of his service to the United States during a presentation of hand-carved canes crafted by the Indian River Woodcarvers Association. The canes were presented to Purple Heart Medal recipients at a ceremony Jan. 17 at the National Navy UDT-SEAL Museum in Fort Pierce.

Mary Kemper
Staff Writer
More than 20 Purple Heart Medal recipients were given special hand-carved canes at a ceremony Jan. 17 at the National UDT-Navy SEAL Museum in recognition of their sacrifices in serving the nation.
The wooden canes were hand-crafted by members of the Indian River Woodcarvers Association, which has made several similar presentations in the past.
Former Army Sgt. 1st Class Melvin Morris, Cocoa, who recently received the Medal of Honor, was one of those in attendance.
Each cane, bearing a detailed bald eagle’s head as the hand-grip, is personalized for each veteran, with decals emplaced with the veteran’s name, years served, branch, unit and other information.
The Colors were presented by an honor guard from the Jack Ivy 666 Detachment of the Marine Corps League, Port St. Lucie. The invocation was given by Navy chaplain, Capt. Dick Flick.
Greg Mann, sergeant-at-arms of the Jack Ivy Detachment, gave opening remarks, giving an overview of the history of the Purple Heart Medal.
Quoting the late Gen. Douglas McArthur, Mann said, “The price of freedom is the blood of the warrior.
“These veterans are the fabric from which our flag is woven.”
To Read More Subscribe Here