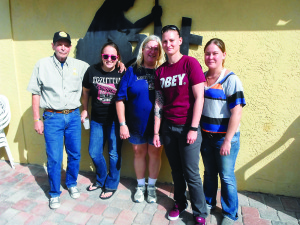 Mary Kemper
Staff Writer
Army Reserve Staff Sgt. Amber Mitchem, Port St. Lucie, thought she was going to a local mall to go shopping with two of her best friends.
Instead, she was driven to a surprise welcome-home party given in her honor by members of AMVETS Post 92, Rio, Jan. 18.
The party had had to be postponed because of the unpredictability of Mitchem’s return date, so she knew it was going to be given — she just didn’t know when, until she arrived at Post 92.
“They definitely tricked me,” she said.
The tall, slim and fit soldier, 27, has served three deployments, one in Iraq and two in Afghanistan, as a member of Military Police battalions.
“Basically, we performed ‘high escort’ duty for general officers and dignitaries,” she said. “Basically transportation. Anywhere from one-star to four-star generals, mostly.”
Mitchem, who enlisted in the Reserves in 2005, served her first deployment in Baghdad, which lasted a year, and her second two tours in Afghanistan, totaling a year and 9 months, somewhat extended by “demobilizing issues,” she said.
Still on active duty, in February, Mitchem will go back to reserve status.
To Read More Subscribe Here