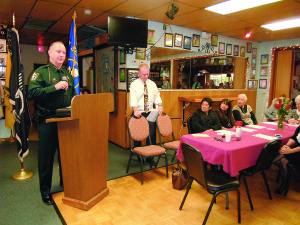 Mary Kemper
Staff Writer
It was to be a birthday party for the late Chief Petty Officer and former Navy “SeaBee” Charlie Cox Feb. 4, but he died just days beforehand. The Indian River Veterans Council decided to turn mourning him into a Celebration of Life instead.
In conjunction with its monthly meeting, the council gave a tribute, attended by Cox’s widow, Busilisa, and family and friends.
The ceremony began with a speech by Bradley Scott, 12, Vero Beach, a League Cadet with the David McCampbell Construction Battalion (SeaBees) of the Navy League Sea Cadets, Melbourne.
(Editor’s note: Please see a feature on Bradley Scott, and his “Change 4 Change 4 Vets” effort to help veterans in need, in the Jan. 22 edition of Veteran Voice.)
Accompanied by his father, Mark, Bradley had most in the assembly moved and impressed.
“I’d like to give thanks to the council for allowing me to speak today about Chief Petty Officer Cox,” Bradley said.
“We in our battalion want to be just like him. We want to recognize a brother.”
To Read More Subscribe Here