These Knights are champions of charity — including vets in need 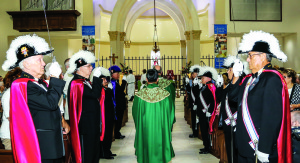 Mary Kemper
Staff Writer
It’s a safe bet most people know that the Knights of Columbus is a large, charitable fraternity begun by Catholics to assist other Catholics in need.
But most people probably aren’t aware that among its degrees of seniority is the 4th Degree — which was originally designated to include defenders of patriotism, as well as defenders of the faith.
Today, this means 4th Degree Knights look after veterans in need, as well as others.
Begun in 1882 by Father Michael McGavney in Connecticut, the organization was named after mariner Christopher Columbus, and as a result of Catholics of the time being denied entry in organizations like the Freemasonry. In those days, Catholics were denied entry into unions and other groups that provided a social net for those in need, and McGavney wanted to fill the gaps.
To Read More Subscribe Here