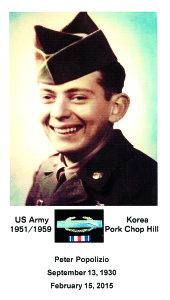 This image, from the program given at the memorial service for Army veteran Peter Popolizzio, who fought at Pork Chop Hill in the Korean War, shows the young soldier in a photo taken shortly after his enlistment.

Mary Kemper
Staff Writer
He was always “Petey” to Ray, his friend of 75 years, who attended P.S. 222 in Brooklyn, N.Y., with him and remained his friend for 75 years.
He was “my hero” to his daughter. He was “my brother” to Army veteran Bill Arnold. He shared “the same trenches, the same screaming shells” of Korea with longtime friend John Holdorf, a former Army captain who served with him.
He was a successful self-taught artist, who also played piano by ear. A building contractor, who helped people pick up the pieces of their lives after Hurricane Katrina. A dad who taught his kids lessons in hard work, and helping other people. A man who loved his wife deeply.
“He was just amazing,” Holdorf said.
Peter Popolizio, Port St. Lucie, died Feb. 15 of cardiac arrest. At his memorial service Feb. 19, he was honored for a life spent achieving much, while trying — most would say unsuccessfully — to keep himself in the background.
At least 100 people showed up at Martin Funeral Home, Port St. Lucie, to pay tribute to Popolizio, an Army Korean War veteran of Pork Chop Hill, during which he received a Silver Star for saving the lives of two comrades.