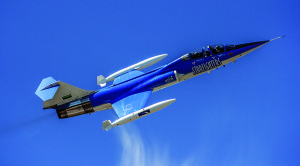 File photo by Mitch Kloorfain/chief photographer
The F-104 Starfighter, flown by pilot Rick Svetkoff will be a featured performer at the Tico Warbird Museum’s 2015 Airshow for three days beginning March 13.

For Veteran Voice
Located at the Space Coast Regional Airport, this annual three-day event highlights military aviation and features some of the most famous trainer, transport, fighter and bomber aircraft that flew in combat around the world.
The Valiant Air Command was started by a group of 12 individuals in 1977. Their first air show was primarily flown by combat veterans in their member-owned surplus military aircraft. This event has grown from a small number of member pilots to over 40 aircraft participating each year.
The Airshow this coming March 13-15 will be the 38th consecutive event and will feature the USAF Thunderbirds. In addition to the daily three-hour aerial performance, the family entertainment encompasses military and civilian aircraft static displays, military re-enactors and firepower demonstrations, flight simulators, airplane and helicopter rides.
Ground events include car displays, a kid’s carnival, gift shop and autograph tent, multiple food and souvenir vendors, and pyrotechnics.
Gates open to the public at 8:30 a.m. on Friday, Saturday and Sunday.