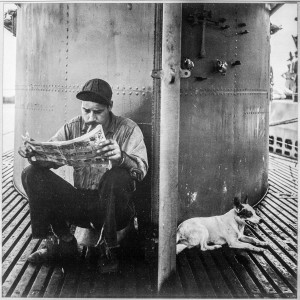 Source: Wikimedia Commons
A submariner relaxes by reading comics at the base of a submarine conning tower during World War II, alongside the submarine’s mascot, ‘Pants.’ The Treasure Coast Submarine Veterans plan to erect a monument to the crewmen of 65 submarines lost, mostly in wartime, with the help of a March 15 ‘Bowl-A-Thon’ fundraiser at St. Lucie Lanes, Port St. Lucie.

On March 15, the Treasure Coast Submarine Veterans will hold its Bowl-A-Thon at St. Lucie Lanes, U.S. Highway 1, from 2 to 4 p.m.
The Treasure Coast Submarine Veterans Base is embarked on a program to raise funds for scholarships for selected veteran students at the Indian River State College.
The base also plans to erect, in the area, a granite memorial for the 65 U.S. submarines and crews lost, mostly in wars. The submarine force suffered the highest rate of casualties, but sunk the greatest tonnage of shipping by any force. Their sacrifices will be honored through the monument.
The base participates in numerous parades in the area, with its 20-foot submarine float on which its veterans ride. Additionally, it participates in awarding scholarships and donations to worthy causes, such as needy or homeless veterans.