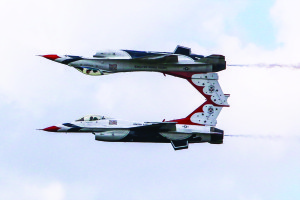 Mary Kemper
Staff Writer
The Air Force Thunderbirds highlighted the 2015 Tico Warbird Air Show at the Valiant Air Command in Titusville March 13-15.
With this year’s theme being “Remembering Vietnam,” the VAC celebrated its 38th show in style, beginning with a flight of its signature C-47 “Tico Belle.”
The Leap Dogs Parachute Team dropped out of the sky carrying the United States and POW-MIA flags, and audience members were encouraged to take off hats and either salute, if veterans, or place their hands over their hearts.
Next came Jerry McCart and his “Wicked Willy,” a jet-fueled car that raced an actual jet, winning by a sizable margin.
Next came demonstrations in vintage aircraft by John Black and his Super Decathlon Team, F86 pilot Doug Matthews and Paul Schulten and his Christen Eagle Aerobatics.
Further performances were given by AT6 pilot Gene McNeely, and VAC vintage bombers and fighters piloted by the VAC team.
After Matthews gave a performance in a P51 Mustang, there was a re-enactment of the “Red Baron vs. Snoopy,” featuring an authentic World War I-era triplane.
To Read More Subscribe Here