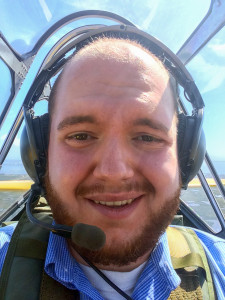 Brandon Zeris
Staff Writer
I was sitting in the passenger seat of T-6 Texan World War II plane when the engine cut out.
It was my first air show — March 12 at the TICO Warbird Air Show media day. The plane was a popular training plane for the United States and the British Commonwealth leading up to and during the war.
Nothing good could come of this, I thought. (Actual thoughts were a bit more profane)
OK, granted, the pilot and I were still on the ground, but it’s still pretty unsettling — getting ready to go hang out with some birds in the sky in an old plane and then caput, mechanical problems.
My pilot, Mark Adema, who flies 777s for United Airlines, pumped in more fuel and gave it another go.
Nothing.
“We’ll get it going.”
Again.
Nothing.
At this stage, all I could think was “If by the grace of God, this metal hunk of (expletive) gets in the air, I won’t be around to tell about it.”
To Read More Subscribe Here