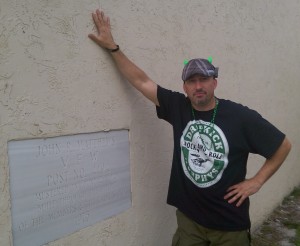 Photo by Patrick McCallister
Commander Chuck Greene stands next to the cornerstone at the Veterans of Foreign Wars Post 4194, Stuart on St. Patrick’s Day. World War II vets formed the post in 1945, and dedicated its hall the year President Gerald Ford announced the end of the Vietnam War. Greene, who’s 46, is young by veteran service organization standards. He’s trying to muster an even younger generation of veterans to shed images of the VFW being a place for World War II to Vietnam veterans.

Patrick McCallister
For Veteran Voice
Chuck Greene is 46 years old. Anyone who spends time around veterans organizations knows that means the commander of the Veterans of Foreign Wars Post 4194, Stuart, is often the youngest guy in the room. He aims to become middle-aged at the post.
“We need younger vets,” he said.
Nationally, the VFW is singing the same song. Late last year, John Stroud, national commander, wrote a blunt letter to the organization’s 7,700 posts.
“I am extremely disturbed by the recurring reports from the field as well as the media’s portrayal of the VFW as an organization that is comprised of old and out of touch veterans who would rather drink in a dimly lit canteen than open their doors to our younger veterans,” he wrote. Stroud went onto say, “The fact remains that the stereotypical, dingy, dark and smoke filled VFW Post and canteen do exist, but they have no benefit to our organization, provide no aid to our mission nor to the veterans we strive to help and serve.”
To Read More Subscribe Here