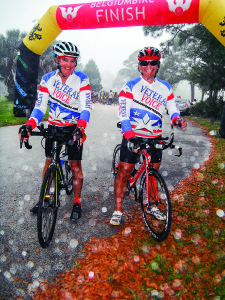 Patrick McCallister
For Veteran Voice
A foggy morning in Palm City didn’t dampen anyone’s enthusiasm. The fourth annual Riding for Heroes had the largest turnout ever. It was on Sunday, March 22, and the six-member Team Veteran Voice made its inaugural appearance at the cycling event.
“I think it ended up a little over 200 (riders),” John Goings, president of the Treasure Coast Cycling Association, said. “It takes about five years to build (annual cycling events) up.”
The association co-sponsors Riding for Heroes with Palm City’s Lance Cpl. Justin J. Wilson (U.S. Marines) Memorial Foundation, Justin’s Wings. The ride commemorates fallen service members and honors veterans. Numerous riders show up sporting military- and patriotic-themed jerseys.
Army veteran Jose Cordeno, Port St. Lucie, was at the ride in a U.S.M.C. jersey. He wore it to honor Lance Cpl. Wilson, in addition to honoring his brother who was a Marine. Cordeno, who’s 78, was riding more than 100 miles that morning.
“I’m looking forward to it,” he said.
On the Veteran Voice cycling team were publishing partners Ted Wilson — no relation to Justin Wilson — and Sharon Elkins, along with their spouses, Linda Wilson and Vietnam veteran Ted Elkins, Richard Ramos, and me. Ted Wilson and Ramos went the longest route, 105 miles. The rest of us did the shortest, 40. Other routes were 60 and 80 miles.
To Read More Subscribe Here