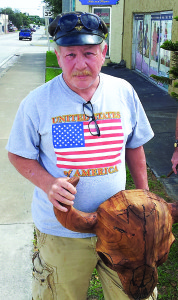 Photo courtesy of AVET Project
Navy veteran Jim McDole holds a small buffalo skull sculpture he made from a bit of Chinese tallow from which he’s co-creating “The First Buffalo Hunt,” an 8-foot wood sculpture. McDole is homeless in Cocoa and hopes the sculpture will help him rebuild his life.

Patrick McCallister
For Veteran Voice
“Captain” Jim McDole had a lot going for him.
“I had four successful businesses,” he said.
Then he broke his back about 10 years ago, which led to a diagnosis of degenerative disc disease. McDole was pretty successful, but by his own reckoning, hadn’t been very responsible to get the proper insurance and investments in case life went wrong. And wrong it went. Between the injury and subsequent depression, he went from owning a $400,000 home to living in his van.
“The sculpting I hope will get me off the street,” he said.
McDole is a lifelong artist, and got a rare opportunity many homeless vets don’t, thanks to friends — a shot at making enough money to start rebuilding his life. Double Eagle Saw Mill gave him a large block from a fallen Chinese tallow on speculation. Fellow sculptor LC Lindsey and he are creating “The First Buffalo Hunt” from the tree.
“It’ll go on the market for around $100,000,” McDole said.
When done, Lindsey and McDole will pay Double Eagle $7,000 for the wood.
The 8-foot wood sculpture, largely inspired by McDole’s son’s Choctaw and Cherokee heritage, features a Native-American boy seated with a chief on a horse for his first buffalo hunt.