Vietnam traveling Wall will be presented in Jupiter, Melbourne 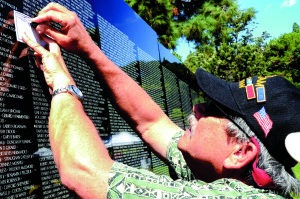 Source: Wikimedia Commons
The Vietnam and All Veterans of Brevard, who host the Vietnam Traveling Memorial Wall all over the U.S., will present the Wall at events honoring Vietnam and Iraq and Afghanistan veterans in Jupiter April 8-12. Subsequently, the Wall will occupy pride of place at the Brevard veterans’ 28th annual reunion, slated April 20-26 in Melbourne. In this photo, Vietnam veteran Jerry Turrieta takes a rubbing of a friend’s name during a display of the Wall in Garden Grove, Calif., Sept. 10, 2014.

Mary Kemper
Staff Writer
Thanks to the Vietnam and All Veterans of Brevard, the Vietnam Traveling Memorial Wall will be presented first in Jupiter and subsequently at the Brevard veterans’ reunion in Melbourne.
The Vietnam and All Veterans of Brevard has its own Traveling Wall, which it shares at locations around the country, and which it will share with Jupiter for its upcoming event.
From April 8-13, a series of activities will commemorate Vietnam veterans, and also veterans from the Iraq and Afghanistan campaigns, via its “Some Gave All” tribute, according to Tom Corey, a disabled Army veteran of Vietnam and the event’s coordinator.
The Wall will arrive at the Florida Atlantic University’s Abacoa Town Center April 8, escorted by the Jupiter Police Department and a motorcycle procession composed of numerous Vietnam-veteran riders, and will be erected that day by volunteers, according to Mary Ann Goodman, public affairs officer for the West Palm Beach VA Medical Center.
The Moving Wall is a half-size replica of the Vietnam Veterans Memorial in Washington, D.C. It contains the names of 58,267 service personnel missing or killed in the Vietnam War.
The Wall will be on display from 2 p.m. April 8. Subsequently, it can be visited from 9 a.m. to 9 p.m. through April 12.
Veterans have round-the-clock access until the exhibit closes April 13.
Many other activities are scheduled as well, Corey said.