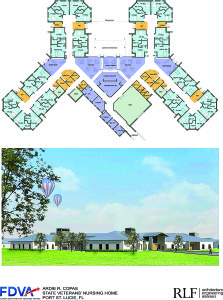 Image courtesy
of the Florida
Department of
Veterans Affairs
The Florida Department of Veterans Affairs wants the Ardie R. Copas State Veterans’ Nursing Home to have single-occupancy rooms in four clusters to give it a homey feeling. Groundbreaking will be later this year, or early next year.

Patrick McCallister
For Veteran Voice
The Florida Department of Veterans Affairs wants the Ardie R. Copas State Veterans’ Nursing Home to look like the Treasure Coast, not like … well, like the Florida Department of Veterans Affairs. Construction on the new facility in Tradition should start late this year or early next year and take about two years to complete.
“We have found with our residents, especially those involved in memory care such as Alzheimer’s, if they are surrounded with sights and sounds that are familiar to them, it makes it a more hospitable environment,” Steve Murray, communications director at the state veterans department, said.
On April 8, the department visited Tradition to show the community the evolving design. Wayne Teegardin, St. Lucie County’s veterans services manager, said the design the department showed at a public meeting attended by about 40 is built around a homey feel.
“They’re creating small enclaves of people, so it doesn’t feel like an institution with long hallways,” Teegardin said.
20 to 128 residents in single-occupancy rooms set up in four clusters. The clusters join to a center complex in the middle. Each of the clusters has dens, too.
“They’re clustered in small groups with eating close by, with recreation close by,” Murray said. He added, “If they want to share in larger things, there’s the commons areas.”