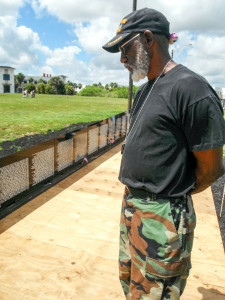 Staff photo by Mary Kemper
Charles Brown, Vero Beach, an Army veteran of Vietnam, examines the Vietnam Traveling Memorial Wall April 10 for the names of his buddies who lost their lives in the Vietnam War. The Traveling Wall was the main feature of activities that took place April 8-13 at the Florida Atlantic University campus in Jupiter paying tribute to those who died in the war.

Charles Brown stood quietly, gazing for a long time at the etched list of names on the glossy black surface. He brushed away tears more than once.
“Right now, I’m looking for Jack Driscoll and Reginald Bird,” said the Army veteran of the Vietnam War, and Vero Beach resident April 10.
“But every single one of these people are my buddies,” he said. “Every single one.”
The Vietnam Traveling Memorial Wall, presented at Florida Atlantic University’s Jupiter campus April 8-13, gave hundreds of Vietnam veterans, family and friends a chance to reconnect with loved ones who lost their lives in the war. The Wall was one of the highlights of the six-day tribute in Jupiter.
Also on display was the Florida “Remembering Our Fallen” exhibit, containing photos and other memorabilia paying tribute to all Florida service members who have lost their lives in Iraq and Afghanistan following Sept. 11, 2001.
At FAU’s Abacoa Town Center, the April 11 opening ceremony had Alan Gerstel, former television news anchor, as master of ceremonies.
Color Guards were provided by several veterans’ organizations, as well as a Marine Corps detachment, Jupiter Police Department and Palm Beach County Sheriff’s Office and Fire Rescue.