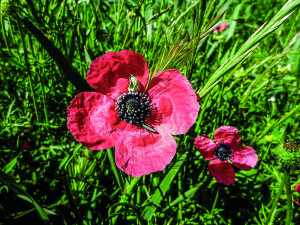 Patrick McCallister
For Veteran Voice
It’s almost inarguably the most recoognized symbol of war remembrance in the world: the poppy.
“It’s a symbol of the ultimate sacrifice and remembering the generations that went before us,” Jo Ann Maitland, president of the American Legion Auxiliary 399, Palm City, said. “The poppy is a symbol of the continuum of sacrifice generation after generation has made for us.”
The post and auxiliary did their first poppy giveaway last year to raise donations. Maitland said it went very well.
“That’s one thing people do recognize is the poppy,” she said. “The picture that it brings to mind of crosses in the field and all that.”
The poppy’s association with rest and death goes back millennia. A Canadian, one Lt. Col. John McCrae, forever connected the poppy to war dead in his famous World War I poem, “In Flanders Fields.” May 2, 1915, is the 100th anniversary of McCrae’s inspiration — the death of friend Lt. Alexis Helmer.
“There was a lot of poetry written during (World War I),” Johnathan Casey, archivist at the National World War I Museum and research center manager at the Edward Jones Research Center, said. “That is probably the most iconic one.”
To Read More Subscribe Here