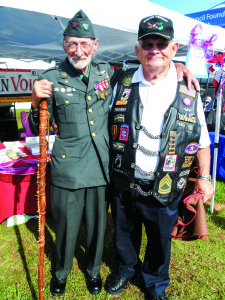 Mary Kemper
Staff Writer
By some accounts, as many as 100,000 were expected by week’s end to have attended the 28th annual Vietnam and All Veterans of Brevard Reunion at Wickham Park, Melbourne, April 19-26.
Rain on Wednesday caused a bit of anxiety, but by the afternoon it cleared, and the rest of the week saw soaring temperatures, with only occasional relief from clouds.
There were certainly tens of thousands of visitors, in spite of the heat, especially on Saturday. They came to pay their respects at the Vietnam Memorial Traveling Wall, based in Melbourne, as well as static display tributes to POW/MIAs, fallen veterans from other wars, and a tribute to K-9 dogs who gave their lives in combat.
More than 1,500 motorcycle riders from veteran groups all over the state escorted the Traveling Wall to Wickham Park April 19.
To Read More Subscribe Here