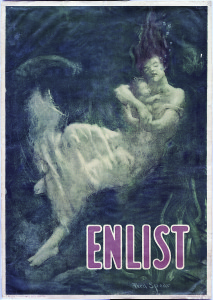 Image courtesy of the National World War I Museum
The May, 1915, sinking of the RMS Lusitania was so dramatic that this poster needed no explanation at the time. After a German U-boat torpedo struck the passenger liner off the Irish coast, there were secondary explosions that sped the ship’s descent under the waves. So fast and hard was the sinking that only a few of the ship’s almost 50 lifeboats were launched. Nearly 1,200 of the 1,959 people on the ship perished. The sinking cost almost 130 Americans their lives and it started this nation’s slow march to war.

Patrick McCallister
For Veteran Voice
It’s been 100 years. On May 7, 1915, a German U-boat torpedoed the RMS Lusitania into history. It wasn’t the first passenger ship the Germans shot during The Great War, nor did it produce the first American deaths.
But, almost 130 Americans died and our nation’s slow slide into the war started in full. On April 6, 1917, Congress declared war on Germany thus associating itself with the Allied Powers against the Central Powers. After the declaration, military recruiting posters famously read, “Remember the Lusitania.”
In the almost two years between the sinking and war declaration, the United States was increasingly pro-British. Florida, however, had a fair amount of trade going on with Germany, mostly in lumber. Indeed, the German-American Lumber Company operated in the Panhandle and shipped a lot of wood out of Jacksonville.
“At that time, there were pro-German rallies in Florida,” Tallahassee-based historian and author Joe Knetsch said.
He said one pro-Germany rally in Miami attracted at least 500. There were some large ones in Jacksonville, too.
“They had a lot of people who wanted to hear both sides,” Knetsch said. “Florida was a melting pot even back then.”
Nevertheless, Florida newspapers were pretty aghast at the sinking of the Lusitania.