To this Marine, the flag is more than a symbol 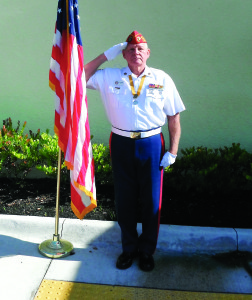 Gregg Mann
For Veteran Voice
(Editor’s note: Gregg Mann, a Marine Corps veteran of the Vietnam War and multiple Purple Heart recipient, is sergeant-at-arms for the Jack Ivy 666 Detachment of the Marine Corps League in Port St. Lucie. He spent a year piecing together thoughts on the American flag as they occurred to him, resulting in the following essay.)

The Vietnam War was the most unpopular war in the history of the United States. Regardless, we fought with honor, pride and sacrifice to the extent that 58,195 of our brothers gave their lives for the freedom we have today.
More than 13,000 Marines were killed in the Vietnam War, and 88,000 were wounded.
For the Vietnam War veteran, the war remains vivid in our minds. For many, the often invisible scars of war continue to last for a very long time.
Combat is burned into your soul, and it will never go away. War is hell. This was the defining experience in the lives of many Vietnam veterans. Forty years ago, they all fought and died with honor for their country.