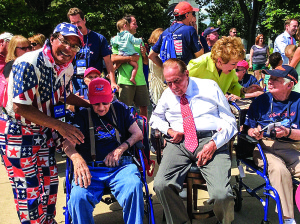 Photo courtesy
of Shamsher Singh
Port St. Lucie dermatologist Dr. Shamsher Singh, left, escorted World War II veteran Eugene Wright, center, who fought in the Battle of the Bulge and the Bridge at Remagen in World War II, on an Honor Flight this year to Washington, D.C., as a guardian. Also attending was former U.S. Sen. Robert Dole, Kansas, right, with wife Elizabeth standing behind him.

Mary Kemper
Staff Writer
A Port St. Lucie dermatologist and longtime military supporter will join between 75 and 80 veterans as one of an equal number of guardians May 30 on an annual Honor Flight to the nation’s capital.
Dr. Shamsher Singh, who practices in Port St. Lucie, will be the guardian of Port St. Lucie veteran Joseph Aiello. They, and all the other participants, will wear distinctive T-shirts and caps created for the occasion as they visit important memorials in Washington, D.C.
“The last veteran I escorted was Eugene Wright, who fought in the Battle of the Bulge, and the taking of the bridge at Remagen,” Singh said. Singh is about to embark on his 11th Honor Flight.