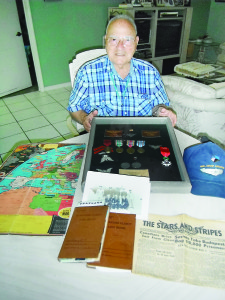 Staff photo by Mary Kemper
World War II Navy veteran Rocco ‘Rocky’ Vasca, Port St. Lucie, is shown at his home surrounded by memorabilia from his service in wartime. Included are, from left, a map of the European theater published in late 1941, showing key battles and engagements up to that point; flight log books; a photo of Vasca’s airship crew; a 1941 copy of Stars and Stripes; and a shadowbox case for Vasca’s medals and other memorabilia, including, sitting on top, the French Legion d’Honneur, awarded June 5 at a ceremony at Boynton Beach Memorial Veterans Park.

Mary Kemper
Staff Writer
After the long-awaited D-Day invasion, it was an all-out effort to beat Nazi Germany into submission, and France was to be the point of the spear.
No sooner had a beachhead been gained in Normandy, than the next objective was the rest of the country.
It was the job of a young Navy airship crewman to assist in “reconning” German danger zones in the south of France, to locate and target potential dangers to invading forces, like mines and other defenses.
His name is Rocco “Rocky” Vasca, Port St. Lucie. On June 5, at a ceremony at Boynton Beach Veterans Memorial Park, he became a Chevalier, or Knight, of the Ordre National de la Legion d’Honneur, or Legion of Honor.
Philippe Letrilliart, consul general of the French Consulate in Miami, presented the prestigious award to Vasca and 11 other veterans for meritorious service to the French nation during World War II (only six veterans were able to attend the ceremony).
Along with Color Guards, invocations and speakers, the French national anthem, the “Marseillaise,” was played, along with Kate Smith’s iconic recording of “God Bless America.”
“That one’s my favorite,” Vasca said. “It could easily be our national anthem.”
American Legion Post 164 hosted the ceremony, which also commemorated the 71st anniversary of the D-Day landing.
To Read More Subscribe Here