The ‘hero ship’ of Pearl Harbor 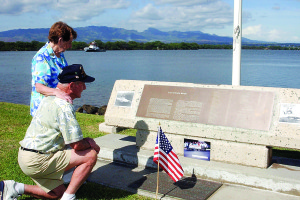 Source: Wikimedia Commons
On Dec. 6, 2002, USS Nevada survivor Woodrow Derby and his wife look silently at photographs and flags they have placed on the USS Nevada Memorial in Hawaii. Derby was an honored guest for the upcoming Pearl Harbor Day commemoration aboard the USS Arizona Memorial. The ceremony featured guest speaker the late Sen. Daniel Inouye of Hawaii and the attendance of 16 Pearl Harbor survivors and their family members.

FOR VETERAN VOICE
(Editor’s note: In the course of his experience as a veteran, former Port St. Lucie Mayor Robert Minsky has received articles, letters, clippings and other documents from friends and acquaintances about various wartime experiences. He has graciously shared some of these with Veteran Voice. Following are accounts of the USS Nevada and its role in Pearl Harbor on Dec. 7, 1941.)

One of the overlooked facets of the Japanese attack on Pearl Harbor is the performance of the crew of the USS Nevada.
The average age of the 1,400 crew members of the Nevada was 19 ½ years old. Fifteen officers above the rank of ensign were assigned, and there were 105 ensigns.
By happenstance, the only officer above the rank of ensign on the ship at the commencement of the attack was a lieutenant commander in the Naval Reserve, who was actually “standing by” for the assigned “Officer with the Day’s Duty.”
To Read More Subscribe Here