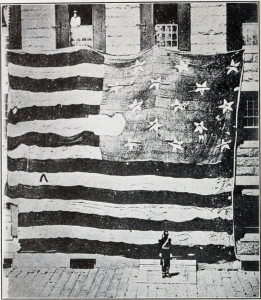 Source: Wikimedia Commons
Flag that floated over Fort McHenry in 1814.

Patrick McCallister
For Veteran Voice
The Pledge of Allegiance didn’t exist when a 19-year-old Wisconsin teacher, Bernard Cigrand, gave his students a writing assignment on June 14, 1885, the 108th anniversary of the adoption of the American flag.
“He had his students write essays on, ‘What the Flag means to me,’” Jack Janik, chairman of the National Flag Day Foundation, said.
Thus started Flag Day. Well, maybe, but we’ll come back to that.
Francis Bellamy, author of the Pledge, claimed that by the 1880s patriotism was visibly waning in America. He’d compose the Pledge in 1892, seven years after Cigrand first gave those schoolchildren that patriotic writing assignment, to renew patriotism.