Group helping homeless vets could sure use help themselves 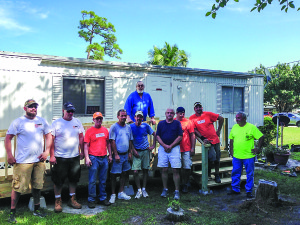 Mary Kemper
Staff Writer
House-A-Vet began life in December of 2013, and officially became a nonprofit just under a year ago.
It reached a major goal with the donation of a mobile home in Stuart, which, with the help of the St. Lucie West Home Depot, it renovated to be able to accommodate up to three homeless veterans for up to 90 days.
Additionally, House-A-Vet performs building projects large and small, anywhere from fixing a World War II widow’s running toilet to building a ramp for a disabled Vietnam veteran, said director Kevin Donahue, who, along with his colleagues — like co-founders Lawrence “Radar” McPhillips, assistant director, secretary John Wharton Jr. and Pete “Palm City Pete” Ellis — has a background in the building trades.
“We could definitely use an electrician (volunteer), though,” Donahue said.
Indeed, volunteers — and donations — are sorely needed by House-A-Vet.