Swim fit for a SEAL 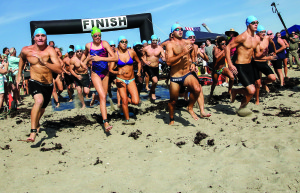 File photo by Mitch Kloorfain/chief photographer
Swimmers make their way to the shoreline to begin the Aaron Vaughn Memorial Frogman 5k Swim Saturday in 2014 at Jensen Beach. The event is named in honor of Aaron Vaughn, a Navy SEAL team member that was shot down in August, 2011 in Afghanistan. For additional information, visit www.operation300.com.

Patrick McCallister
For Veteran Voice
MARTIN COUNTY — On Saturday morning, a few hundred swimmers will plunge into the Atlantic and paddle up to 5 kilometers. It’s time for the annual Aaron Vaughn Memorial Frogman Swim.
“We had nearly 300 (swimmers) last year,” Billy Vaughn said.
Billy is Aaron Vaughn’s father. The number 300 is highly symbolic. The swim supports a charity the Vaughn family started after Navy SEAL Aaron Vaughn was killed in Operation Enduring Freedom, Afghanistan. American Legion Post 399 in Palm City is named for Aaron Vaughn.
The charity is Operation 300. The organization holds mentoring camps for children of fallen service members four times a year.
“The kids come in and do things they’d (have) done with their dads,” Billy said.
Things like fishing, swimming, shooting. Billy said the camp — which charges attendees nothing — hosts about 100 children a year. It’s done on temporarily-donated land just south of Stuart. Operation 300 is likely to expand to five camps a year and is looking for property.
“We’re having growing pains, but that’s a good thing,” Billy said.