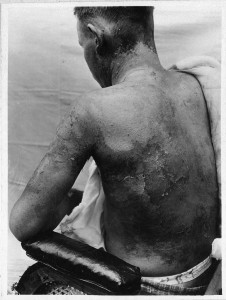 Patrick McCallister
For Veteran Voice
I love National Public Radio, NPR, but I’m a little leery on this bit of reporting: “The VA’s Broken Promise to Thousands of Vets Exposed to Mustard Gas.”
The 10-minute story aired on Tuesday, June 23. Investigative reporter Caitlin Dickerson described in detail what comes off as an apathetic and incompetent — bordering on malicious — Department of Veterans Affairs for two decades stonewalling about 4,000 survivors of deliberate and prolonged mustard gas exposure the military did during World War II. The Pentagon feared Nazi Germany resorting to mustard gas as a last-ditch effort to stave off the Allied advances, so it did tests on American service members to prepare for it. The ethics of that decision are easy to question 70 years later. But none of us know what we’d done if the decision was ours at the time.
To Read More Subscribe Here