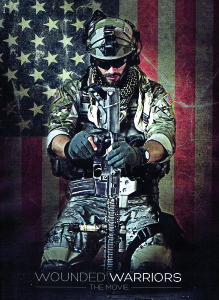 Mary Kemper
Staff Writer
It’s an injury that leaves scars no bandage can heal. It tears veterans — and their families — apart. Like a pebble thrown into a pond, its ripples spread far, affecting everyone they come in contact with.
It leaves veterans in terrible despair, and terribly lonely.
It’s PTSD. And whether we like to admit it or not, it affects every single veteran who has ever fought in combat. And their families all too often pay a terrible price.
To help a real healing process to begin, a new movie is now in production, called “Wounded Warriors.”
Some top movie-industry figures have signed on, and it already features a popular and moving theme song, recorded by two country stars to date.
But unlike other Hollywood movies, this one is going to depend on us — the American people — to fund it, and help make it the success it deserves.
It’s all about a Vietnam-veteran father and his Afghanistan-veteran son. Because the father didn’t conquer his PTSD demons when his son was small, the son grew up already troubled, and his combat service aggravated his own behavior, which, like his father, included self-medicating with alcohol.