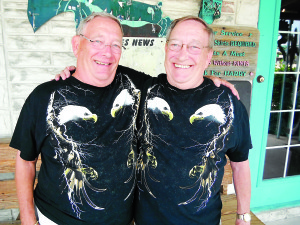 Staff photo by Mary Kemper
Twin brothers Mark, left, and Leigh Savage still like to cause mischief many years after their service during the Vietnam War, in which Mark was in the Navy, and Leigh the Army.

Mary Kemper
Staff Writer
Pity the poor reporter who meets Mark (Port St. Lucie) and Leigh (Jupiter) Savage for the first time.
The identical twins had invited me to meet with them at Harry and the Natives restaurant, Hobe Sound. When I got there, they were waiting.
I had already met Mark once before, so I greeted him with, “You’re Mark, right?”
“No,” he said. “Yes,” said Leigh.
Words can’t describe the twinkle in their eyes at the resulting confusion, something they’ve clearly relished all their lives.
Born Oct. 13, 1946, the brothers grew up in the Boston, Massachusetts, area.
Merry pranksters from an early age, they delighted in mixing up their own parents and schoolmates.
“We switched classes all the time,” Mark said. But more fun was to be had at home.
“For a while, I thought our names were ‘Oh, God’ and ‘damn it’,” Leigh said. “To the day he died, our stepdad couldn’t tell us apart.”