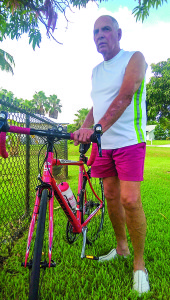 Patrick McCallister
For Veteran Voice
Harold Trieber is past Commander and now Vice Commander of the Korean War Veterans Treasure Coast Chapter, 106. He’s also a velophile, an avid cyclist. On May 16 he was hit while cycling in Port St. Lucie.
“I got up as I usually do and I was going on my bike ride,” he said.
Trieber put on bright red and white cycling gear, including his helmet and the 78-year-old started his morning exercise. Within an hour he was unconscious on a medical helicopter. A driver hit Trieber while crossing at a residential neighborhood intersection. The driver had a stop sign — Trieber didn’t. Among his injuries, Trieber had a fractured C-2 disk. In other words, his neck was broken.
“When I turned to the left, I saw myself getting hit by a car, and I was on the hood,” he said.