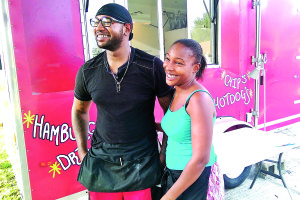 Patrick McCallister
For Veteran Voice
Isaac Parks’ grew up in a military family.
“My dad, my siblings, my aunts, my uncles, everyone served,” he said.
He also grew up in a ministry family.
“My mom, she had a passion to cook,” Parks, said “My parents believe you can minister through food.”
Parks is a veteran with disabilities. He served in Operation Enduring Freedom-Afghanistan in the 101st Airborne. He received a medical discharge.
“I had a couple close calls,” he said.
Parks said when he got out of the military last year he thought veterans benefits would start immediately, because the Army was supposed to be coordinating with the Department of Veterans Affairs. That’s not how things worked out.
“I went months and months without pay,” he said.
Parks added, “Going from making $50,000 a year to nothing was hard. I see so many veterans hurting out there.”
To Read More Subscribe Here