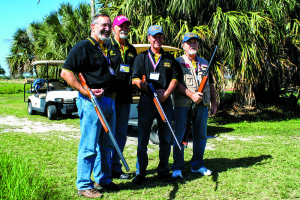 File photo by Patrick McCallister
The Vietnam Veterans of America Chapter 1041, Stuart, recently lost its 2nd Vice President, Joe Howard, third from right. Howard was killed in a motorcycle accident on July 19. Days later 1041 received the chapter of the year award from the Vietnam Veterans of America. From left to right are Frank Tidikis, Steve Dame, Howard and Lew Jones, the president.

Patrick McCallister
For Veteran Voice
The Vietnam Veterans of America Chapter 1041, Stuart, had a big loss on July 19 when Joseph “Joe” Howard, was killed in a collision while motorcycling. He was 67.
“He was one of our most active members,” Lew Jones, president, said. “It’s a big loss for us.”
Jones added, “He had a great sense of humor and was very enthusiastic and an all-around good guy and friend.”
Days after the sad news, the Vietnam Veterans of America named 1041 the chapter of the year. Jones received the award at the recent national convention in Springfield, Illinois.
“We were selected, one out of 716 chapters.” Jones said.
Ben Humphries, president of the VVA’s Florida State Council, said 1041 was against stiff competition for the award. He said many Vietnam Veterans of America chapters can fit all the members on a large fishing boat, but make the waves of a cruise ship.